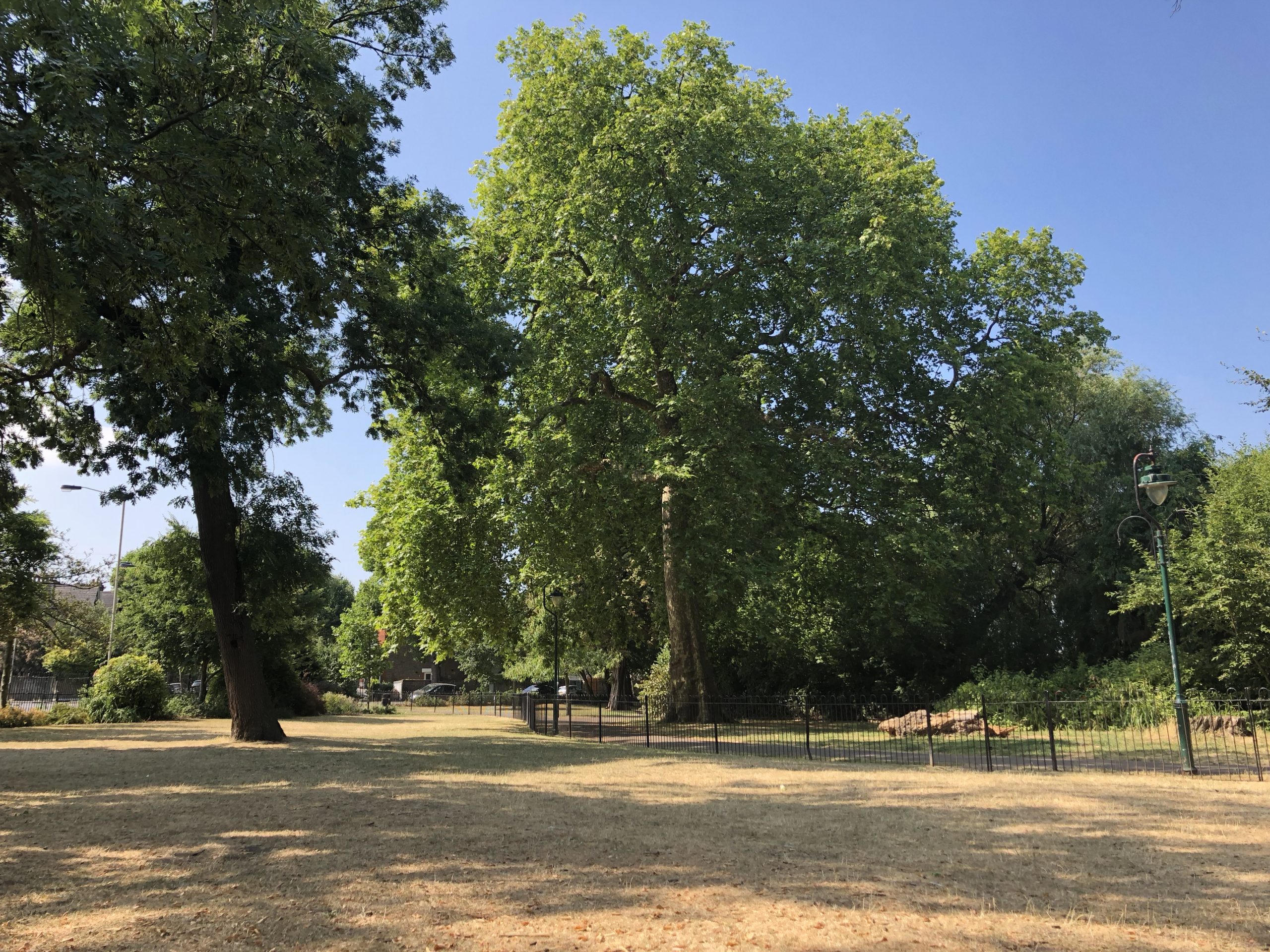 Sunray Gardens has many older trees including London Planes, Limes, Ash trees, Weeping Willows, Alders with many young ash, alder, sycamore, horse chestnuts shooting up in unexpected places and new shoots are renewing the remains of the Elm Wood. In recent years trees from around the world have been added, which gives Sunray Gardens an interesting collection of trees.

A great way to get to know the park and the trees within it is to follow the Sunray Gardens tree trail. You can do this by downloading the map and trail guide listed below.

Many thanks to Paul Millington for putting together this tree trail and to Stephen Lamb for his IT expertise on the map.

A guide to the trees in Sunray Gardens

The following trees can be found in Sunray gardens:

A native tree, Hornbeam means ’hard tree’ and was used for chopping blocks and cogwheels. Bark grey and smooth, leaves 7-12 cm, double-toothed, corrugated, 10-13 veins. Male catkins in spring, the fruit is a small nut held in a leafy bract that is slightly asymmetrical which makes it spin as it falls, improving wind dispersal. They can live for 300 years.

A small evergreen oak tree with low twisted branches from the Mediterranean basin where Cork Oak forests cover wide areas. Fossil remnants show the tree to be an ancient species. They are slow-growing and can live for 250 years. They have a very thick and deeply ridged bark which is harvested as cork. They can be harvested every 7 to 10 years with a small axe after which a new layer of cork regrows, which made it a renewable resource by the Romans for buoys in fishing nets and for making sandals. Used today for wine bottle corks, shuttlecocks, insulation panels, floor and wall tiles and sound-proofing. The green leaves are oval, hard, crinkled, curved down with 5-6 shallow spine-tipped lobes each side. The leaves fall in the second year of growth. Small acorns sit in a deep cup fringed with elongated scales.

On the bank of the lake are several English Elms– These Elms are the remains of the Elm Wood of Elmwood Road.

When Dutch Elm Disease came here from North America in the 1960s it devastated our English Elms, and over 20 million trees were destroyed. These Elm trees here are all still relatively young and have not yet reached the height at which the DED beetles fly at over 9 metres, so these trees have remained undetected to date. From the age of 20, they become more vulnerable as they gain height, so the 7 Elms here between about 15 and 25 years’ old are all at risk. However they have all spread by suckers to produce many more young Elm trees which should remain healthy until they also reach maturity. There have been several times in recorded history when Elm trees have been reported as being under the threat of extinction. In Roman times they were used to support vines by wine producers before they were apparently wiped out by disease. So the Elm tree has proved very resilient over many years. It does now appear that one of the tallest of these Elms is not in the best of health.

Sadly the older Elms here have recently succumbed to what we believe to be Dutch Elm Disease. We are advised that there is nothing that can be done to save those trees afflicted, and the others have to take their chance. In time the shoots appearing from the suckers will provide replacement trees.

Bark is brown, rough and fissured, buds are ovoid, pointed and hairy, leaves are round to oval, toothed with rough, hairy texture, scrubby and buckled with uneven bases at the leaf stalk, flowers hang in tassels, dark pink to red. The leaves on these Elms have pimples from a leaf gall that is unsightly but not harmful to the tree.

John Constable frequently painted elms in his landscapes to capture the flavour of lowland England. Hopefully English Elms or some of the hybrid Elms developed to counter the disease will in time take their place again in the English landscape.

Just inside the Elmwood Road gate is a Golden Rain Tree – also known as Pride of India although originating in China. The rough bark is purplish-brown with small orange fissure. Leaves have from 7 to 15 leaflets with deeply serrated margins, unfolding red in late May, turning pale yellow then green, and in autumn yellow and brown. Dramatic flowers of mustard-yellow plumes. The pinkish bladders, like Chinese lanterns, turning deep orange in the autumn, each hold 3 pea-size seeds. Any Chinese lanterns left over from the previous year are now brown.

Amongst the various shrubs in the middle of the park are four small upright Irish Yews – an upright growth of the Common Yew, but also has small curved needles that grow all around the twig rather than in rows. Usually planted as an ornamental tree.

Beside the hard surface area used for football and netball, and near the Casino Avenue alleyway is a Japanese Pagoda Tree. The Japanese Pagoda tree is native to China but for a long time has been cultivated and naturalised in Japan, where the trees were often planted in the grounds of Buddhist temples.  Also known as the Scholar Tree which has been planted in gardens and temple grounds in China for over 2,000 years. It is also the symbol of the 8th moon – September -when the official examinations for the Civil Service took place and the scholars studied beneath the tree. The tree has beautiful white flowers in August but flowering normally only commences when the tree is 30–40 years old.  Fruits form after the flowers fade, looking like bright green strings of pearls.

Dominating the pathway a London Plane is the largest tree in the park and probably the oldest at over 200 years old. It is estimated that many trees in this country grow in circumference or girth by around one inch a year. The girth of this tree at shoulder level is around 200 inches, so its age is probably around 200 years. This can only be a rough estimate as the same tree growing in a confined space or more challenging location is likely to grow at a slower rate. This tree has the benefit of a wide canopy in a wide area without any competition from other trees so has probably grown faster than some of the other London Planes in the park, although most of these other London Planes would appear to be between 150 and 200 years old, so could well have been planted at much the same time.

There are several other London Planes in the park.

London Plane is a hybrid between the American Sycamore and the Oriental plane from South East Europe and Western Asia. Being a hybrid the London Plane is more vigorous than either parent and can attain great age and height. The oldest Plane trees in London are still thriving after 320 years. They are tough trees that have been much planted in London streets and parks where they can tolerate high pollution levels. The bark is a scaly khaki-camouflage. The leaves are large, thick and maple-like. When the leaves are shed in the autumn the fruits are very noticeable – they are 3 cm balls of hairy seeds which last all winter and break up in the spring.

Alongside the path is a Loquat – also known as Chinese plum or Japanese plum – a native of south-central China. It is a large evergreen shrub or tree with a rounded crown, short trunk and woolly new twigs. Leaves are long, dark-green, tough and leathery. Loquats are unusual among fruit trees in that the flowers appear in the autumn or early winter, and the fruits are ripe between early spring and early summer, but seldom in the UK. The flowers are white with five petals and have a sweet, heady aroma that can be smelt from a distance. The fruits grow in clusters, are pear-shaped with a yellow or orange skin, and the flavour is a mixture of peach, citrus and mango. Just one fruit seen this year, but it quickly disappeared.

In the grassed area beside the Netball Court are three Maidenhair. These were introduced from China in 1758. Fossils show that they existed over 270million years ago. The leaves are fan-shaped and split down the middle. Ginkgos adapt well to the urban environment, tolerating pollution and confined soil spaces. They rarely suffer disease problems, even in urban conditions, and are attacked by few insects. For this reason, and for their general beauty, ginkgos are excellent urban and shade trees, and are widely planted in parks and in many streets. The tallest of these three Ginkgo is a relatively rare female tree which produces large yellow ovules containing seeds. These ovules litter the path in the autumn, and have the most unpleasant pungent smell.

There is another Ginkgo tucked away in the corner at the Elmwood Road entrance.

Alongside the lake amongst the many Common Alders is a very tall and upright Swamp Cypress, a large growing and long-lived tree, typically growing up to 35m with a trunk coloured grey-brown to reddish-brown with shallow ridges. Leaves are alternate and linear. Unlike most cypresses it is deciduous and loses its leaves in winter, and is known in the USA as the Bald Cypress. The seed cones are round, green and mature to greyish brown, containing up to 40 seeds per cone. Swamp Cypress trees typically grow in swamps or waterlogged areas and have a peculiar woody growth from the root system called ‘cypress knees’, which may help provide more oxygen to the tree or provide more support and stability.

Along the side of the path are four White Mulberries; fast growing small to medium size trees that grow from 10 to 20 metres tall. They are native to Northern China but widely cultivated across the world as they feed the silkworms employed in the commercial production of silk. They are also notable for the rapid release of their pollen from the catkins which is launched at approximately 350 miles per hour which is over half the speed of sound. The mulberries are poisonous when unripe, but edible when ripe. The fruit varies between white and pink and tastes sweet but bland, unlike the more intense flavour of the Black Mulberry.

Cultivation of white mulberry for silkworms began over 4,000 years ago in China where they had discovered that White Mulberry leaves were the food required for the tiny caterpillars that produce the precious silk fibres. China maintained a monopoly on silk production for 2,000 years until Japan acquired the secret and in the 1400s France also began silk production on a large scale. King James I wanted to break the French and Italian monopoly in Europe, so he had a 4 acre mulberry garden planted just to the north of present day Buckingham Palace, tended by the King’s Mulberry Men, but he made the mistake of planting the Black Mulberry instead of the White Mulberry, and the project failed.